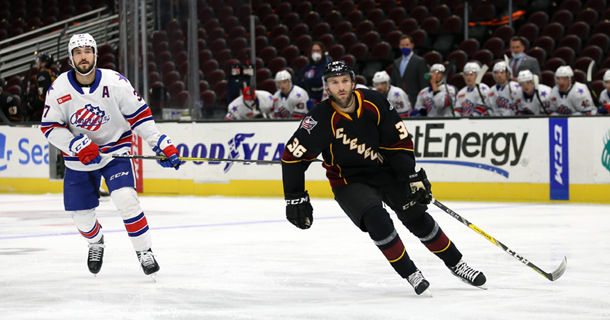 The Cleveland Monsters fell to the Rochester Americans 4-3 in a shootout on Saturday night at Rocket Mortgage FieldHouse. With the shootout loss, the Monsters are now 15-8-1-2 and are currently in second place in the AHL’s Central Division standings.

The Americans scored the lone goal of the opening frame from Jean-Sebastien Dea on the power play at 1:38 sending the Monsters into the first intermission trailing 1-0. Cleveland’s Cliff Pu notched a tally at 6:24 of the second period off assists from Tyler Angle and Thomas Schemitsch knotting the game at 1-1. Josh Dunne quickly helped the Monsters take the lead at 9:22 with a feed from Angle, but the Americans’ Patrick Polino recorded a goal at 11:35 once again tying the game. Jake Christiansen notched a tally at 17:52 off a helper from Schemitsch to send Cleveland to the final intermission with a 3-2 lead. Rochester’s Dea scored his second goal of the night at 9:32 of the final period forcing the game into overtime. Despite scoring chances in the extra frame, Dea recorded the lone shootout goal for Rochester bringing the final score to 4-3.

Cleveland’s Brad Thiessen made 16 saves in defeat while Rochester’s Billy Christopoulos stopped 38 shots for the victory.

The Monsters host the Grand Rapids Griffins on Tuesday, May 11, for a 7:00 p.m. puck drop at Rocket Mortgage FieldHouse. Follow the games with full coverage on FOX Sports 1350AM ‘The Gambler’, AHLTV and the Monsters Hockey Network.