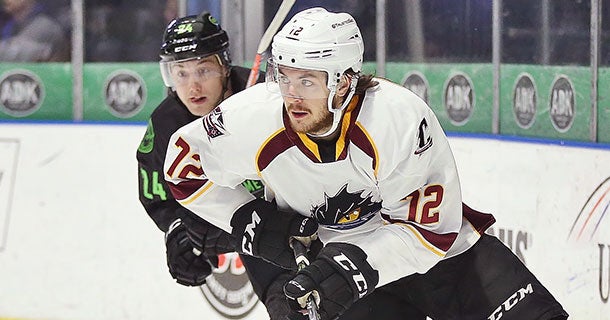 The AHL’s Cleveland Monsters were defeated by the Utica Comets on Saturday at Adirondack Bank Center by a final score of 6-2. With the loss, the Monsters fell to 18-20-1-2 and with 39 points, currently occupy seventh place in the AHL’s North Division standings.

Utica claimed a 2-0 first period lead with a power-play goal from Kole Lind at 8:10 and an even-strength finish from former Monster and Cleveland native Carter Camper at 8:49, but the Monsters answered back with a Ryan MacInnis extra-man strike at 10:43 on feeds from Trey Fix-Wolansky and Andrew Peeke. In the second, Utica rattled off three more goals, from Lucas Jasek at 0:26, Seamus Malone at 3:16 and a shorthanded Nikolay Goldobin marker at 15:23 to take a 5-1 advantage into the third period. Monsters forward Calvin Thurkauf struck for an even-strength conversion at 12:34 of the third with Derek Barach and Markus Hannikainen registering assists on the play, but a Reid Boucher marker for the Comets at 18:05 of the final period established the Comets final margin of victory at 6-2.

Next up for the Monsters, it’s a Wednesday home clash vs. the Rochester Americans with full coverage, live from Rocket Mortgage FieldHouse at 7:00 pm on Alt 99.1, AHLTV and the Monsters Hockey Network.